skip to main | skip to sidebar

This year, the Cairo Refugee Film Festival is going to be complemented by a two-day bazaar at the venue of the screenings. The arcades opposite the main building at DARB 1718 Contemporary Art and Culture Center will be used to put up tables and display the handicrafts made by Eritrean, Eithiopian and Sudanese women. A great opportunity to buy some unique gifts for friends and family back home.

Food is a very important part of the culture of a place and there will be some mouth-watering and delectable spread available. A chance to sample the delicious cuisine from Eithopia, Eritrea and Iraq!

The food and handicrafts for sale at the bazaar are made by women belonging to the refugee communities. These self-employed women have refused to submit to their unfortunate circumstances and have carved out a niche for themselves as suppliers of handicrafts and food. They serve as role models to not only the other women from their community.
The bazaar will be held on the 18th and the 19th of June from 6.00 p.m. onwards.
Posted by cairorefugeefilmfestival (sanks) at 7:07 AM 1 comment:

There have been some changes to the schedule from the time that I posted the last one. Mishaps with the DVDs, disappearance from the mail of some films, promises not being kept etc etc...
But we think that now we have a good line-up of films and they are the ones that will hopefully convey the theme that we have chosen for the festival this year...that of Hope, Adjustment and Integration. Rather than concentrating on the circumstances that lead to the creation of a refugee population, this year we have moved forward and chosen narratives that emphasise the resilience and adaptability of man. Against all odds, the lives that have been uprooted and disrupted are healed in their new environment. The barriers of culture and language are overcome and new lives are built.
Maybe in this strife-torn world, intergration and adaptation are the answers/solution to the quesitons and the problem
Posted by Sanks at 11:37 PM No comments:

Map to the Venue 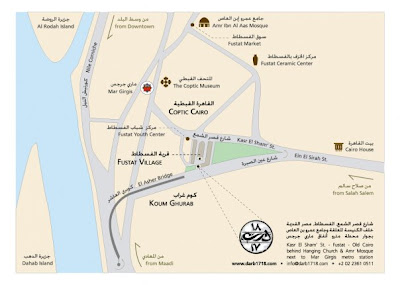 This year, the venue is DARB 1718 Contemporary Art and Culture Center. They have recently inaugrated the "Cinema Al Fourn"-an open air theatre. Instead of chairs there are orange coloured bean bags. Under the star-studded (forget the pollution of Cairo for a moment) summer sky, with a diet coke in hand, watching some thought-provoking cinema.........If this sounds interesting, head to DARB between June 17 to June 20

HOW TO GET THERE?
Coming From Downtown
Take the Corniche Direction Maadi. When the Nile Crystal Boat is on your right, take a U-turn and get onto the bridge (Kubri Al Asher) facing the Al Tawoon Fuel Station. After the bridge, take the first u-turn, then the first right and go straight ahead. Look for a white building with domes

Coming from maadi
Take the Corniche direction downtown. When the Al Tawoon Fuel Station is on your right, get on to the bridge (Kubri Al Asher). After the bridge, take the first U-tuen, then the first right and go straight ahead. Look for a white building with domes.

Coming from Nasr City/Heliopolis
Take Al Sayida Aisha Bridge. Go straight until the first U-turn, then right after Mobil. Go straight till the wall on your right finishes, take a right and go straight ahead. Look for a white building with domes.

The nearest metro station is mary Girgis and it is a five minute walk from there.!
Posted by cairorefugeefilmfestival (sanks) at 12:07 PM No comments:

2. CAMBODIA DREAMS
Production: 2008, New Zealand
Synopsis: The film chronicles the parallel lives of a family divided by the Thai-Cambodian border after the Khmer Rouge regime. The hopes and the dreams finally come true as the family reunites in their Cambodian village after 12 years in the refugee camp.
Director: Stanley Harper
Duration: 65 minutes
Genre: Documentary

3. DAS FRAULEIN
Production: 2006, Switzerland
Synopsis: The film gazes intimately into the lives of 3 women from former Yugoslavia who now live in Switzerland. It is an exploration of physical and emotional displacement, as more and more people move between cultures and countries, in the increasingly borderless world.
The film won awards as best film and best actress at Sarajevo Film Festival (2006) and the Swiss Film Prize for best script (2007) and the FIPRESCI Award at the International Film Festival in Spain.
Director: Andrea Staka
Duration: 81 minutes
Genre: Fiction

4. EVERYBODY’S CHILDREN
Production: 2008, Canada
Synopsis: Both Sallieu and Joyce seem like ordinary teenagers living in Toronto. Having revealed their tragic background, the camera features strong and courageous refugees making new lives for themselves in a city away from home.
Director: Monika Delmos
Duration: 52 minutes
Genre: Documentary

5. RAIN IN A DRY LAND
Production: 2007, USA
Synopsis: In 2004, more than 13,000 Somali Bantus moved (legally) to the United States where they started new lives. Despite the struggle against racism and discrimination, the two families portrayed in the movie maintain a high degree of optimism, attempt to see their lives from an optimistic angle, and try to make the best out of their new lives.
Director: Ann Makepeace
Duration: 83 minutes
Genre: Documentary

6. IN SEARCH OF MY HOME
Production: 2010, India
Synopsis: Sheltering one of the largest refugee populations in the world, India still lacks a comprehensive domestic refugee law that could guarantee them their basic human needs. In Search of My Home is a journey with a Burmese and an Afghan family, as it explores the complexities in their everyday battle for survival.
Director: Sushmit Ghosh & Rintu Thomas
Duration: 30 minutes
Genre: Documentary

7. EAST TO WEST
Production: 2005, Switzerland
Synopsis: In 2004, a wall is being built and the family of Enas must leave their home and move so they do not find themselves on the wrong side. It is the father’s second experience. He was born in a house in Jaffa but, in 1948, he had to leave. Between Jerusalem and Jaffa – to each generation its own move.
Director: Enas I. Al-Muthaffar
Duration: 16 minutes
Genre: Documentary

8. LAST DAYS OF TANF
Production: 2010, Syria
Synopsis: In May 2006, hundreds of Palestinians fleeing persecution in Iraq tried to cross into Syrian territory. For almost four years, they remained stranded in the no man’s land along the Syrian-Iraqi border where they endured the misery of an isolated desert refugee camp. As the camp approaches closure in early 2010, its inhabitants are offered a chance at a new life. UNHCR documents the last days of life in al-Tanf.
Director: Edith Champagne
Duration: 30 minutes
Genre: Documentary

9. REFUGEES FROM RUSSIA
Production: 2009, Russia
Synopsis: The film tells the story of a Russian family, the Frenkels, who had to move from one country to another for more than 100 years. In 1905, they had to leave their native town in Russia to avoid pogroms. Palestine, Egypt, and France were the destinations they were forced to reach. In 2005, Didier Frenkel (grandson) came back to the Frenkels’ native town 100 years after the escape of the family in 1905.
Director: Vladimir Bokun
Duration: 26 minutes
Genre: Documentary

10. DREAMING OF TIBET
Production: 2003, USA
Synopsis: This film looks at the lives of three extraordinary Tibetans who have survived in exile and are deeply involved in working for the survival of their culture. It captures the difficult challenges they each face and conveys the sense of hope they bring to their day-to-day lives in spite of great hardship and loss.
The film won the Audience Award at Amnesty International Film Festival and Honorable Mention at the Columbus International Film & Video Festival.
Director: Will Parrinello
Duration: 58 minutes
Genre: Documentary
11. THE FACES OF HOPE
Production: 2008, Burundi
Synopsis: In the film, young Burundian refugees talk about the challenges they face. They express their hopes and dreams for the future, with certain optimism that they will not remain refugees forever despite the fact that majority of them have been in refugee camps for over 10 years.
Director: Nezia Munezero
Duration: 35 minutes
Genre: Documentary
Posted by Sanks at 12:45 PM No comments:

How would you rate 'Cambodia Dreams?'

How would you rate 'In Search of My Home'

How would you rate Dreaming of Tibet

How would you rate Pray the Devil Back to Hell?

Links to the trailers of films

Welcome to the Second edition of the Cairo Refugee Film Festival!

Please send your comments, feedback and questions to cairorefugeefilmfest@gmail.com

Entry to the Second Cairo Refugee Film Festival is free of charge.